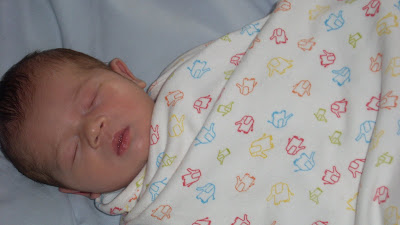 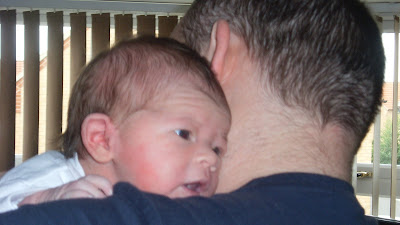 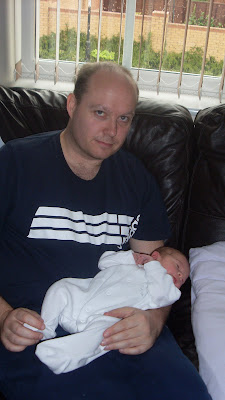 Went to work last Thur when my Mrs was 7 days overdue and came home at 630ish as normal.


My wife was in bed suffering with what she called "period pains", however it wasn't long later that I thought they sounded much more like contractions and in the next hour or so I seemed more certain of this when 4 in 10 mins. However, she didn't make any fuss (nothing like i seen on TV!!!) and eventually we rang the hospital at 830PM as I was concerned that she was bleeding. Things then upped a little bit and I could see my Mrs was in more pain but nothing prepared me for next message. We arrived at hospital (I half expected to get sent home) and the midwife told her she was 9CM dilated and as such was going nowhere as labour was imminent. Literally 1 hr 30 from arriving at this hospital Zoe was born. If that had been the end of the process it would have been an amazing experience for both mum and dad.

However, Zoe heart rate dropped really low during the birth hence she had to be assisted by some very ugly looking utensils, unfortunately the umbilical code had become rapped round her neck and as such was born blue and very distressed and had to be treat for a good few minutes before she cryed. However, relief when she started crying but immediately followed by the biggest stress of my life.

Jean had some issues delivering the placenta which was stuck and as such she started bleeding intensely, she was rushed to theatre for an operation and I was left alone with the brand new baby. Things got really bad in theatre and she had to have multiple blood transfusions and when she came back 90 mins later she was literally yellow and shaking like a leaf - I could not believe how bad she looked and I literally thought she may not pull through.

She is so brave that despite been in this state she fed Zoe within 30 mins of coming back and she had obviously been crying for a long time as could not feed. That 90 mins or so was the best and worst moments of my life and emotions that were with me at this stage were indescribable. Eventually we were able to go to recovery ward as a threesome and I stayed with Jean and Zoe all night, eventually leaving at sometime between 6 and 7 the next morning. I dont mind admitting that I literally went home and got into bed in tears, I had been through such a huge emotional roller coaster and had completely lost control of my emotions.

Few hours later I was back at hospital and despite Zoe doing very well, Jean was still very sick and had to have more blood, however by end of day she was slightly better. I was quite shocked the next day when we were told we could go home, especially as Jean was still weak but she wanted to get out of there so we brought Zoe home.

Was a tough few days at home with the Mrs still ill and Zoey had swallowed lots of stuff she shouldn't have and was also not in the best of nick. However, I am really happy to say that 1 week later they both are ouch better and I can look forward to a fantastic life with the 2 women in my life who mean more to me than life itself. I am so proud of my wife and daughter and so pleased to come out the other side with such a positive result.

1) I never ever donated blood before - this will be the 1st thing I change in my life - events like above make you appreciate some things you take for granted.

2) People who know us have been so kind with gifts / offers for help and messages - this has meant a lot to me in the period described above.

3) A guy at my work who is South American told me that you don't know what love is until your baby is born, a very emotive statement but so so true.

4) It is unbelievable how immensely satisfying it is to be able to sooth / satisfy your baby and vice versa if you cant.

Anyway - wanted to do above - mainly for me as a memory for the future as to how lucky we have been and how grateful I am. I really appreciate the well wishes I have had on this blog (with exception of the spammers who are close in the life ratings to short stackers).

DISCLAIMER
This blog will return to a poker / sports blog and less emotional in the near future.
Posted by Poker play the Soap way at 1:00 pm

Oh and anyone reading this you should all donate blood if you can. I'm shit scared of needles but it doesn't hurt. You also get free TUC's, Penguins, Clubs a cup of tea and an hour off work - everyone's a winner!

please you are all ok now. best wishes.