Saturday was unreal. Started off with a treck across London to the showjumping with wife and kid and then left them to go to Olympic park before meeting up with a mate. We had a few beers then watched GB win Gold in the Womens Team Pursuit in the cycling and then a dash into the Olympic Stadium for one of the most immense experiences one could have with GB winning 3 golds in long jump, heptathlon and then Mo in the 10K.

Next morning I headed to table tennis then back to Olympic stadium to watch mens 100m final which was pretty amazing also.

A £300 double RichardsRoss and Bolt paid for my ticket also so all sweet.

A quite simply stunning experience that will be with me forever - don't think I will ever experience an atmosphere like that of Super Sat in the Olympic Stadium. 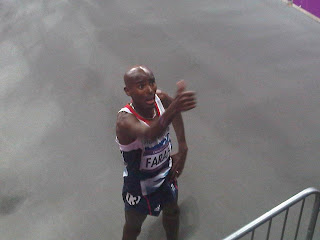